Its A Dogs Life!

Saying that.... 'it's a dogs life'.... I am trying to type this with my cat 'Master Ted' laying in front of the computer. He does not mind that I have to lean my left forearm on him to get to the keyboard... oopsie.... a little bit of tail action happening now. So maybe its a 'cat's life'!
Whilst we are no longer living in Margaret River, I still very much miss it. Miss my mates, miss the town and the surrounds, the bush and the sea....
I was down there at the end of last year and then again last weekend. The cats get to stay at home or at the cattery. (Ted has just gone into a full on roll over so that I may stroke his belly) I love to take Paris with me as she is just the best travelling companion. Well behaved in the car, loves stand up paddle boarding, running around in circles in the sand, exploring the bush, she is into meeting people and other dogs and she is just joyful.
Im always looking for dog friendly places to stay. Please contact me if you have accommodation or have a review from your own vacation experience.
Last year we stayed at a great house in Prevelly. It appears that it is no longer available. There is another next door, which is in a fabulous location just down the path to the doggie park and beach... perfect. The Studio In Prevelly. (as yet not reviewed)


It's lovely that people read my blog, thank you :) I love to receive correspondence. Rosie Burnett from Margaret House wrote to me this week to tell me about her Pet Friendly Accommodation... it looks great and Paris and I will head out to check it out next time we are down that way. Rosie also gave me a link to another new holiday accommodation site that might be of interest to readers, they do list Pet Friendly also.

This last weekend was soo magical.... the weather was going to be super hot in Perth, and just 'hot' in the South West. I packed my bags, lashed the board to the car and little Miss Paris and I headed south.

I have only just got the knack of tying the board to the car. Where I was going wrong was I was tying it to the roof rails and not the horizontal rails! If anyone knows what I mean. I just couldn't figure out why I couldn't get rid of the humming/drumming!!! Any way, it took my brother Paul and his mate Neil to watch what I was doing to figure it out.

So Miss Paris and I stopped at a great little place for a SUP, its between Busselton and Dunsborough, a place called Siesta Park. I love it. So calm mostly, it is part of Geographe Bay and looks to the North. I often see that the Great White Sharks like to cruise along not far from the shore!!! Paris and I were literally feet away from the beach, we could jump in and run for it if need be :) As I was putting the board on the car, a couple of lazy dolphins were wandering along where we had been. So gorgeous. Im pretty sure dogs are allowed on that beach. 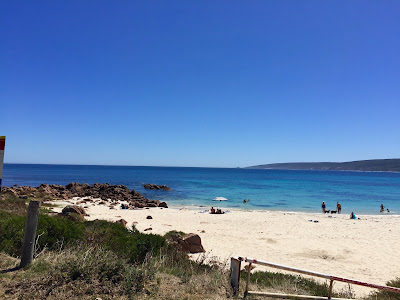 This is Smiths Beach.... oooooh la la :) What a beautiful day, what beautiful waters... it was absolutely stunning! As we were driving down the hill we could see the helicopter perusing the bay... they would signal if there were sharks. And, let there be no mistake, this whole South West is on the Great White Shark route, north and then south following the whales. My attitude is that, there are heaps of sharks down there swimming past me all the time.... Im still alive!!! And mostly, Im as close to the shore as possible :) Yes Im chicken, but they are beautiful and scary!
Gosh, we had perfect weather all weekend. I was buggered that evening. We drove down to Augusta, and realised that both our impressions of the waterways were not in sync. Marian was thinking that the seaway was way east of this western shore, and that the ocean only opened to the estuary occasionally. I thought that the estuary had been opened to the sea with what we call a 'cut'. I was right. The public map was wrong! The map thing is dangerous as any one going out into the estuary could potentially come to grief in the wrong weather/tide conditions....

I digress.... you can take your dogs down to the river shore. But in this section where we took the boards off, which is near the caravan park, they do need to be on a lead.

Paris loves being on the board and as I was still getting my board ready, she followed Marian through the shallows and literally jumped aboard her board :) I so suggest anyone to go for a paddle down there. The water was clear, lots of smallish stingrays and the sun was shining. Mind you the wind was blowing and when we got to the other side and walked across what is now a little island, the tide was ripping through the cut... we met a couple on Kayaks and they said that the tide was about to turn. So if we didnt get back to the other side soon, we could potentially be sucked out to sea!

Sooo... we paddled, paddled, paddled and paddled harder, we were heading into the wind and had to cross the tidal current. Marian did it ever so well. I was a little nervous as I had Little Miss Paris on the bow. I sat down and paddled the board like a kayak, Paris sitting tucked in between my thighs. If we went over, as in fell off the board, we would be in trouble.

In the end, the worst thing was that, people on the shore thought we looked a funny sight and photos were being taken, I did have words with the gentlemen on the jetty as they were openly laughing at us, Paris and I. Marian was confidently paddling off in to the distance, past the biggest pelicans I have ever seen....


Just a note for visiting dog owners.... please beware for your dogs!

Paris came home covered in little Pepper & Salt ticks, they are itsy bitsy and actually really hard to see. Her flea treatment usually handles this, but I havent used it for ages as I dont like to dose her up with poisons unless there is reason to. This worked almost instantly, although a couple were more persistant. Do your research first before trying to take ticks off yourself or the animals.

Also beware of shallow, warm waters, especially where you find lots of sea birds. There is a thing called Pelican Itch or Swimmers Itch, Narrabeen Itch etc. Mostly caused by parasites that target birds. I know that the research is about the effects on humans, but just think about what it does to your poor pooch! Dont forget to wash you and your faithful companion down with fresh water immediately after. I didnt and had almost 2 weeks to get the poor girl back to no itchy scratchy!

Other Stuff From Me

Some Of My Favourite Websites